When you hear the word prophet what do you think of? The first thing that probably comes into your mind is the bible, whether it's the New Testament or the Old Testament, the bible holds many religious prophets. But did you ever think that there could be modern day prophets today? There are many modern day prophets, or change makers, in our world today, you just not know about them. If someone told you worldwide sensation, actress and talk show host Ellen DeGeneres was a modern day prophet of change, would you believe them? Well its true, between her donations to charities to speaking out against issues that she believes in, she is just one of many examples of today's modern day prophets of change.

Ellen Lee DeGeneres was born on January 26th 1958, in Metairie, Louisiana, to parents Elliot and Betty DeGeneres. Growing up her mother worked as a real-estate agent and her father was an insurance salesman. When Ellen was sixteen her parents divorced and her mother, Betty, remarried salesman Roy Gruessendorf. Shortly after Ellen, her older brother, Vance, her mother and her new stepfather moved to Atlanta, Texas. Ellen grew up dreaming of becoming a veterinarian, but she gave it up when she discovered she was not “book smart”. Throughout her high school years and into her early twenties Ellen waited tables, selling vacuum cleaners and painting houses. In 1976, she graduated from Atlanta High School and continued her education at the University of New Orleans. She studied communications for two semesters before she dropped out. After this Ellen used her sense of comedy to make a living, she performed small stand-up comedy acts in local pubs and coffee shops. By the early 1980's Ellen was becoming more popular and by 1986 she landed a spot on The Tonight Show Staring Johnny Carson. Ellen dated actress Anne Heche for many years, but in 2000 the couple broke up. After that Ellen was involved with Alexandra Hedison for a few years before finding her true love Portia de Rossi. On August 16th, 2008, after California legalized same sex marriages, Ellen and Portia sealed the deal at their extravagant wedding. 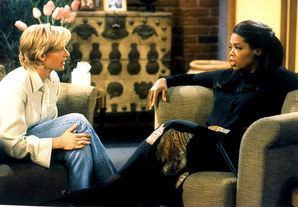 Ellen carried around a huge weight on her shoulders, for many years, until she finally admitted to the public that she was a lesbian. This announcement didn’t come right away though. Before telling the public, her sitcom show, Ellen, aired an episode called The Puppy Episode where he character openly discussed her homosexuality. Shortly after that, in 1997, Ellen appeared on an episode of The Oprah Winfrey Show where she came out as a lesbian. On April 14th, 1997, TIME Magazine did a cover story on Ellen that was entitled, Yep, I’m Gay. This big announcement made Ellen TV’s first openly lesbian star. Ellen’s life did not get easier after she came out, many religious groups protested against her, and her sitcom lost many viewers. At this point in time being a lesbian was not the social “norm”, it was sometimes even considered to be socially unacceptable so after Ellen came out she was not looked up to as a role model to young women, and was sometimes even frowned upon.

Ellen as a Spokesperson

Ellen DeGeneres may not seem like your traditional ‘hero’ or ‘change maker’, but she definitely is one. Ellen uses her worldwide fame to bring awareness to issues that are close to her heart; she is a modern day prophet of change. Ellen is known for doing a ton of charity work and donating a lot of money to different charities. Ellen currently supports thirty-four different charities and non-profit organizations; they vary from Red Cross to STOMP Out Bullying. During the month of October, Ellen’s, Ellen for the Cure, campaign runs on her show to support Breast Cancer Awareness Month. Along with Ben Affleck, Ellen has launched a campaign called Small Change Campaign to help benefit feeding America. Ellen is also widely known for her love of animals and her attempts to work with animal rights. Not only is Ellen a vegan, but she also supports many animal right charities. Ellen has accepted PETCO Foundations hope award because of her promotions of bonding the animal kingdom with humans. Ellen also co-owns Halo Pet Food, an organization that supplies over a million natural pet meals to a hundred animal shelters all over America. In 2009, Ellen was awarded People’s, Women of the Year, for The Ethical Treatment of Animals.

“I wish we lived in a world where caring for animals wasn’t so rare that it deserved an award. All I do is treat animals with the respect and dignity they deserve. I hope someday soon, everyone does the same.”

Ellen’s show alone has raised over fifty million dollars and has donated it to a variety of causes and campaigns. Ellen uses her talk show as a way to help struggling families and individuals. She will often bring people onto her show and tell her audience their story, whether it is their struggle or something amazing they did to help society, and she never lets them leave the show without a gift or money. She also, very often, will talk about and discuss local and global issues that are close to her heart, this brings great awareness and attention to these issues. Ellen has been included in TIME Magazine’s 100 Most Influential People, Forbes 100 Most Powerful Women and Entertainment Weekly’s 50 Most Powerful Entertainers. At the end of every episode Ellen finishes by saying, “Be kind to one another”, which promotes, not only being kind, but also treating everyone fairly and equally. Thought they may not be traditional, Ellen DeGeneres does many things in her life that make her an excellent example of a modern day prophet.