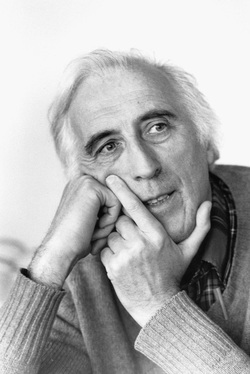 Jean was born in Geneva and was raised to a high standard having a father who was once the 19th Governor General of Canada. Jean served in WWII as a midshipman in the Royal Canadian Navy aboard the HMS Vanguard. after the end of the war he decided to move himself to Paris to acquire his undergrad and wound up achieving his PH'D in Philosophy. This is where he gained his appreciation for the unknown in the world and comfort in religion, as well this is when he developed a deep respect for mankind and the abilities that every person holds. Without divulging what this writing will touch on, Jean has been awarded high honors of Order of Canada, National Order of Quebec, Legion of Honor, Humanitarian Award (2001), French Legion of Honor.

After he finished his schooling, Jean realized the incredibly high level of people institutionalized with mental disabilities. After learning this Jean felt “lead by god” to invite two men into his home to live with him, these men, Raphael Simi and Philippe Seux, were both invited to leave their institution and live in the home Jean owned. Once the men came he decided to name their home L’Arche which is directly translated to The Ark, a reference to Noah’s Ark.
Turmoil

Jean experienced pressure in his life when he realised he wanted to help create something larger than himself and to help people everywhere in anyway possible. He began by establishing the first L’Arche housing project in Richmond Hill in 1969, Jean was teaching at the University of Toronto at the time. Jean knew he needed to help people but was having to pay for his own living expenses but still managed to help others live the quality of life they should have been.

Jean’s time of crisis was over a few years, during his educational career he knew he needed to do something, anything. this need to help stems from his participation in WWII where he was forced to realise the reality of the world and i believe this is where his passion for humanitarian aid stems from.

Jean is still speaking publicly about religion and how people should be acting and treating the people they interact with on a daily basis. he is a published author with 30 books as the author/co-author. His home is still in one of the original L’arche homes in France. Although he has passed on the responsibilities to others he is still traveling around the world to all of the L’arche community buildings, he also organises retreats for anyone from any walk of life along with their families. He also spend much of his time conducting lectures for those who are interested in his work.

How to take action!


If you are interested in what Jean has created through the L'Arche, than i strongly encourage you to look at what they are working on now and how you can apply to be a live in resident to assist the residents.
http://www.larche.ca


If you would like to look into anything else Jean has done or find other ways you can connect to your own community look at Jean's official website.