Randy Pausch was born on October 23, 1960 in Baltimore, Maryland, USA. Randy grew up in Columbia, Maryland and attended Oakland Mills High School, and then received his bachelors degree in computer science from Brown University. He then got his phD in computer science from Carnegie Mellon University.He is an american professor of computer science, human-computer interaction, and design at Carnegie Mellon University.He also taught at the University of Virginia. He is an award-winning teacher and researcher, he has worked with Adobe, Google, Electronic Arts (EA), and Walt Disney Imagineering, and founded the Alice software project.Before Randy found his calling to be professor and lecturer, he loves
engineering and has mastered it with his studies and accomplishments. He lives in Virginia with his wife and three kids and has now become a family man as well. 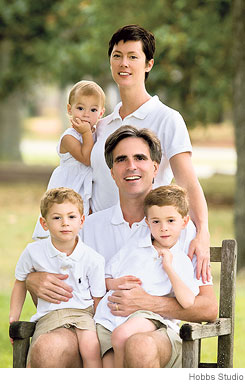 Randy is a dedicated educator. He feels so passionate about his work and about achieving your dreams in life that he always wanted to share that with his students and others around the world. He’s known for his humor, and his incredible sense of knowledge. Also for his motivational lectures and inspiring words. He was given the chance to give a lecture on his personal reflections and journeys at Carnegie Mellon University and decided that he would do it. Through his academic career he had given many amazing talks, he was known as the best speaker in the computer science department. He knew that he had more in him, and that if he gave all he had in this lecture he might be able to offer people something special. He had many childhood dreams including being in zero gravity, playing in the NFL, authoring an article in the World Book encyclopedia, being Captain Kirk, winning stuffed animals, and being a disney imagineer. He worked so hard at all his dreams, and achieved every single one of them in his own creative way that gave him a great feeling of sucsess. He taught that the best things in life wont come easy, and that you have to work hard to get, trying to work around the "brick walls" that are put up to stop you in life. 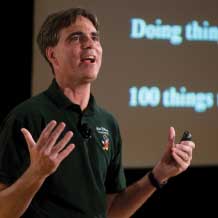 Shortly after being asked to give a lecture about the journey of his life he discovered that he had pancreatic cancer. He tried surgery’s, procedures, and treatment but nothing worked and he only had a few months to live. He thought about calling off the lecture, he knew the other professors would understand but it was his vocation for what he does that made him feel the need to continue with creating this lecture. Once he found out the tragic news there were so many things to be done. He had to deal with his own grief and the sadness of his loved ones, he had to gets his family's affairs in order, but still did not want to give up the opportunity to give his last lecture. His wife was upset with him for still wanting to do the lecture, she didn't want to sound selfish but she wanted him all to herself and their family on their last precious months together. Especially since he had to leave for his lecture on his wifes birthday, the last birthday they would spend together. He had to spend time with his family, but also spend hours a day working on his lecture, throughout all this he was fighting the sickness of his cancer. He spent 90 minutes working on his lecture, then spend time with his family, then back to working on the lecture again for hours fighting the tiredness and pain he had to deal with.

Lots of people discover themselves in a time of crisis. When Randy was diagnosed he did everything in his power not to feel sorry for himself because he knew it wouldn't do him any good, so he did the things he loved the most and that was being with his family and giving lectures.These lectures are video taped so he knew it could be saved so his children would have a chance to look at it one day when they were older. Randy quotes “Under the ruse of giving an academic lecture, I was trying to put myself in a bottle that would one day wash up on the beach for my children. If I were a painter, I would have painted for them. If I were a musician, I would have composed music. But I am a lecturer. So I lectured.” I think any great prophet is always so dedicated to their passion that even if they’re in such a terrible time in their life they never stop doing what they love for the people they love. 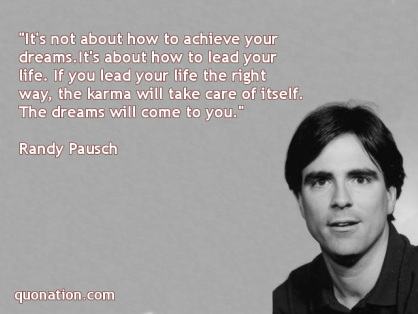 Randy is the ultimate spokesperson, being that lecturing is what he does for a career and what he bases his whole world around. I feel that this was God’s plan for Randy because he had accomplished so much already in his short life, and if Randy wasn’t sick maybe his all wouldn’t have gone into his last lecture. I think he was literally speaking the words of God through his final lecture by inspiring so many people to carry on with their dreams in life no matter what happens. By giving his speech he created the ultimate awareness for people all over the world, you didn't have to see his lecture in person to understand how amazing of a person Randy is. By having his lecture filmed and by writing a book about his lecture he has given the opportunity to inspire people all over the world.

I challenge everyone to read The Last Lecture by Professor Randy Pausch and to watch his lecture, so you two can see how this man is a modern day prophet. He talks such inspirational words that you will never forget. 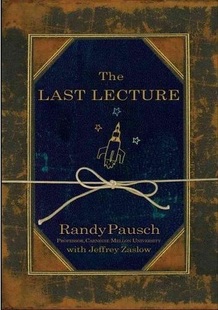 click here to watch the last lecture
Also since he has now died from pancreatic cancer he has worked with two organizations dedicated to help fighting this disease:

The Pancreatic Cancer Action Network
Click here to view site
And The Lustgarten Foundation
Click here to view site
A quote from Randys book “Many cancer patients say their illness gives them a new and deeper appreiation for life. Some even say they are grateful for their disease. I have no such gratitude for my cancer, although I’m certaintley grateful for having advance notice of my death. In addition to allowing me toprepare my family for the future, that time gave me the chacne to go to Carnegie Mellon and give my last lecture. In a sense it allowed me to leave the field under my own power.” 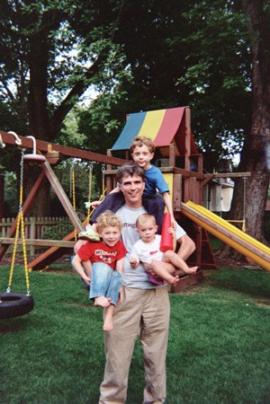 This is the picture Randy uses as his last slide at the end of his last lecture.